As you plan your Jordan itinerary, you’ll probably want at least one day and night in Petra – and rightly so. That’s why it’s important to understand the weather in Petra each month and other important details of visiting during different times of the year.

Below you’ll find a complete but quick guide to visiting Petra in January. I’ve included details on the weather, what to pack, and what to expect during your visit.

Temperatures in Petra during the month of January range from overnight lows around 38°F (3°C) to highs around 57°F (14°). January is definitely the coldest month to visit Petra, and there is even a chance you might get lucky enough to see the ancient city under a dusting of snow.

In terms of weather, it’s usually clear and sunny – about 75% of the time – but if it does rain (or snow), it’s usually not in excess of 1 inch of total precipitation. The weather is pretty stable, too, so if you check the forecast before departing on your Jordan trip, it’s unlikely to change too dramatically once you’re on the ground.

There’s an average of 7 hours of daylight during January in Petra, as it’s only the month after the December solstice. The sun rises around 6:30am and sets between 4:30pm and 5:15pm. This means that you will have quite a different experience visiting Petra during January, since you have significantly shorter hours to see the ancient city by day in January compared with closer to mid-year (when there are almost 13 hours of daylight!).

During the winter, the Petra site is only open from 6am to 4pm; that’s two fewer hours during the winter than during the summer season. This means you’ll want to plan to get up earlier and get into the site as soon as the sun is coming up since the site closes earlier in the day.

Despite closing earlier during the winter months, Petra By Night still occurs Monday, Wednesday, and Thursday nights at 8:30pm all year long.

What to Pack for Petra in January

As January is the coldest month to visit Jordan and Petra, you’ll want to adjust your packing list slightly to be comfortable even if the weather is on the chillier side.

I have a packing list for Jordan already, but I recommend amending it to have more layers. In particular, I’ve lately become addicted to Unbound Merino, and it’s a great option for Jordan any season. Merino wool is wrinkle- and odor-resistant, antibacterial, and moisture-wicking – all good qualities for a material in a climate where temperatures range a lot from day to night. I’d also throw in a hat to keep your head warm if you do attend an event like Petra by Night (or stargazing in Wadi Rum, if you’re also visiting that part of Jordan).

Additionally, while you might not have as many daylight hours during January, it’s still worth bringing sun protection like a hat and sunscreen to ensure you don’t get toasted while out under the unrelenting sun in the Petra site.

Other Considerations for Visiting Petra in January

Hands down, the best part about visiting Petra in January is the lack of crowds. January is one of the lesser-touristed months in Jordan, so it’s a great time to visit if you want to see sites like Petra without hoards of spring and autumn visitors (those being the best times to visit). You’ll be able to get incredible pictures of Petra without tons of people in them – especially if you rise early to enter the site before most folks, as I suggested due to the shorter days of this month anyway.

If you still have questions about visiting Petra in January, I’ve got you covered. Check out my guides on how to visit Petra from both Amman and Aqaba, as well as a complete Petra itinerary that includes everything else you need to know: how many days to visit Petra, the best things to do in Petra, where to eat in Petra, and where to stay in Petra. Give it a look to get all the other info that doesn’t change by month or season but is important for planning your visit.

Have any other questions about visiting Petra in January? Let me know in the comments! 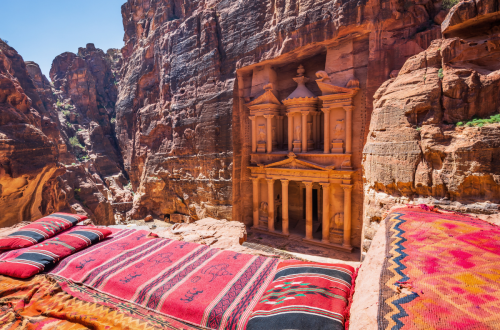