There are many things to consider when planning a trip to Jordan, and undoubtedly food is one of them. There are some incredible Jordanian foods and drinks to try, but you might have a specific question after reviewing those lists: what about if you don’t eat meat or animal products?

Being vegan or vegetarian doesn’t mean you should skip a Jordan trip – it’s entirely possible to visit Jordan if you choose to not eat – or are unable to eat – meat or animal products. On my most recent trip in March 2022, I traveled with a pair of vegans who were able to find delicious options throughout the country, including big cities like Amman, more remote places like Wadi Rum, and popular tourist stops like Petra.

So if you’re planning to visit and wonder what it’s like to eat vegetarian or vegan in Jordan, read on! I’ll cover all the info you need, including the basics of your different options for these two dietary preferences, vegetarian and vegan dishes you can look for on menus, and handy phrases to learn to help you stick to your diet in Jordan.

As a traveler, you may be aware that some cuisine types are more vegan or vegetarian friendly than others. This is why I thought it would be helpful to give you a brief overview of Jordanian gastronomy first.

Given its location in the Levant region, Jordan has been influenced by diverse cultures, which reflects in its cuisine. Flavors from North Africa, the Middle East, Persia, and the Mediterranean region can be easily perceived in Jordanian cuisine.

While numerous Middle Eastern delicacies have been adopted in the Western World, there is more than hummus and falafel to Jordanian gastronomy.

On past trips, I noticed that meat, mezze, dairy, and flatbreads are the backbone of Jordan’s cuisine. Lamb is by far the most common type of meat. Although beef, chicken, and sometimes goat and camel meat, are also used for different dishes.

Mezze is a dining concept very similar to tapas in Spain. The word derives from the Persian language, which means “to taste.” Essentially, mezze is an assortment of small appetizers that make up an entire meal. The dishes vary depending on the region, but different salads, olives, and breads and dips such as hummus, yogurt, and baba ganoush are staples.

Is there Vegetarian or Vegan Jordanian Cuisine?

While Jordanian cuisine is definitely meat- and dairy-based, a vegan or vegetarian in Jordan will still find many culinary alternatives. There are a huge variety of meat-free salads, lots of vegetable-based dips, and plenty of cheap snacks.

Another point worth noticing is that travelers can always ask to make a dish suitable for a vegan or vegetarian palate.

For example, numerous salads come with cheese, but vegans can ask servers not to include them or simply take them away. Other traditional dishes have meat and veggie versions, like the dolma. These vine leaves come stuffed with rice, herbs, and ground beef, but some restaurants prepare a meat-free recipe. that easily be adapted to a vegan or vegetarian palate.

Visiting Jordan as a Vegetarian

A vegetarian in Jordan won’t face many challenges to find a delicious meal. While the country’s gastronomy relies heavily on the use of meat, there’s no shortage of vegetarian dishes either.

In fact, many Middle Eastern dishes have been introduced into the Western diet for being vegetarian-friendly.

As I said before, many Jordanian dishes are plant-based, with dips and salads having vegetables as the main ingredients. Also, since some vegetarians consume dairy products, it will be much easier for them to navigate the country’s gastronomic scene. Dairy products are always present in Jordanian dishes, with yogurt and cheese as the most common ones.

Last but not least, travelers will find a number of excellent vegetarian restaurants in Jordan, primarily in Amman. Check the list below:

Feynan Ecolodge also offers a fully vegetarian menu which makes it a great place to stay in Jordan!

Visiting Jordan as a Vegan

It’s definitely easier to travel as a vegetarian than as a vegan in Jordan. But that doesn’t mean you’ll have to stick to boring lettuce and tomato salads to survive on your trip. You’ll just need to check the menu and ingredients more carefully.

Although veganism is still a new concept in Jordan, many dishes are inherently vegan or can be easily made vegan. Overall, if you’re vegan in Jordan, you can always rely on mezze. While mezze does include lacto-ovo dishes, most dips, like hummus, baba ganoush, and tahini are completely vegan.

Now, I know I said you wouldn’t have to live on bland salads during your trip. Nonetheless, salads in Jordan are on a whole different level.

Jordanians prepare delicious (and oh-so-well-seasoned) salads to accompany most of their meals. Believe me, you’ll come home with many new recipes!

Vegan restaurants in Jordan are a bit harder to come across, but here are a few alternatives you can try:

While there isn’t a cultural component (such as you might find in India), there’s tons of vegetarian food in Jordan. Below you’ll find a list of different vegetarian dishes you can try. This isn’t an exhaustive list, but an example of what you can enjoy on each meal throughout the day.

You can certainly eat vegetarian in Jordan and still have a hearty start to the day, by trying some of the following dishes:

There are some good meat-free options for lunch, too:

Pretty much everything you had for lunch you can also have for dinner. Here are a few more veggie dishes you can try, though:

There are also some sweet treats you can enjoy while eating meat-free in Jordan too:

Before you think baba ganoush and hummus will be your main options for vegan food in Jordan, here’s a list of all the mouthwatering vegan dishes you can try.

Unfortunately, there aren’t many desserts that are vegan and authentically Jordanian. Hala’s Treats is a patisserie in Amman famous for selling vegan and gluten-free treats. They have everything from chocolate cookies to lemon cake. While it isn’t Jordanian cuisine in the strict sense, it will satisfy your sweet tooth.

Jordanians are hospitable people who’d love to cater to your culinary needs whenever possible. However, not everyone speaks English. If you’re not going with a guide, chances are you’ll run into locals who only speak Arabic. In case that happens, here are some helpful phrases to communicate that you’re a vegetarian or vegan in Jordan. Note that there isn’t an Arabic noun for “vegan,” so you’ll have to be more specific if you are a strict vegan.

Have any other questions about how to eat vegetarian or vegan in Jordan? Let me know in the comments and I’ll do my best to help! 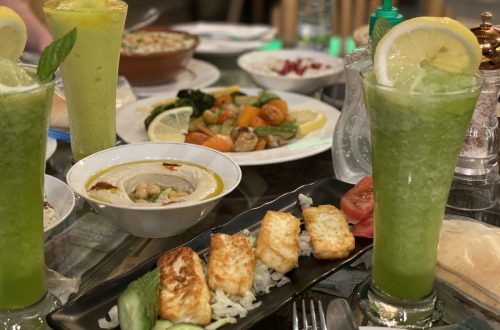 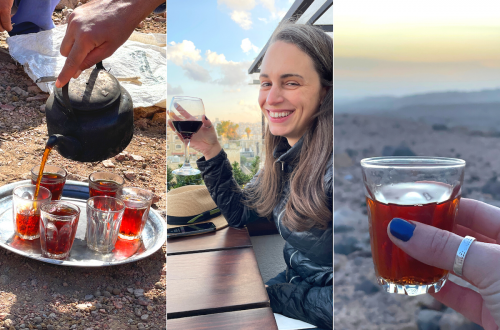